Public Holds Broadly Favorable Views of Many Federal Agencies, Including CDC and HHS

Pew Research Center conducted this study to understand how Americans view federal government agencies. For this analysis, we surveyed 1,013 U.S. adults in March 2020. The surveys were conducted in both English and Spanish over the phone under the direction of SSRS. Respondents to this survey were randomly selected via a combination of landline and cellphone random-digit-dial samples. To ensure that the results of this survey reflects a balanced cross section of the nation, the data are weighted to match the U.S. adult population by gender, age, education, race and ethnicity and other categories.

See here to read more about the questions used for this report and the report’s methodology.

As the United States confronts the coronavirus outbreak, Americans continue to rate a wide range of federal agencies favorably, including two at the forefront of dealing with COVID-19: the Centers for Disease Control and Prevention and the Department of Health and Human Services. Other federal agencies, including the Postal Service, the Census Bureau and the Department of Homeland Security, also receive broadly favorable ratings from the public.

The public has long viewed the CDC positively. Currently, 79% of U.S. adults express a favorable opinion of the CDC, including large majorities of Republicans and Republican-leaning independents (84%) and Democrats and Democratic leaners (77%).

Views of the CDC among Republicans have grown more positive in recent years. Democrats’ views have shown less change; the share of Democrats with a positive view of the agency has ticked down slightly since last September, from 82%.

Republicans feel far more favorably toward the Department of Health and Human Services than they did during Barack Obama’s presidency – and substantially more positively than they did seven months ago. Currently, 80% view HHS favorably, up 17 percentage points since last fall. In 2013 and 2015, fewer than half of Republicans viewed this agency favorably. Majorities of Democrats have consistently expressed positive views of HHS (70% currently).

The national survey by Pew Research Center, conducted March 24-29 among 1,013 U.S. adults, finds that more than three years into the Trump administration, larger shares of Republicans than Democrats express favorable opinions of eight of 10 government agencies included in the survey. And for the other two agencies, the Postal Service and the IRS, nearly identical majorities in both parties have favorable opinions.

Republicans’ views of the Justice Department improved after Donald Trump’s election, while Democrats turned more negative. Even so, favorable views of the DOJ have increased sharply since September; currently, 76% of Republicans view the DOJ favorably, up from 61% last fall and the highest positive rating for the department in polling going back a decade. By comparison, 50% of Democrats feel favorably toward the Justice Department, little changed from the fall and among the lowest ratings in a decade.

Views of Immigration and Customs Enforcement (ICE) remain even more polarized: 77% of Republicans and Republican leaners view the agency favorably, compared with only 28% of Democrats and Democratic leaners.

With the decennial census underway – and most Americans saying they plan to participate – 77% of Americans overall view the Census Bureau favorably, compared with just 12% who hold an unfavorable view. And while the public holds positive views of several federal agencies, ratings of the Postal Service continue to stand out: An overwhelming 91% say they have a favorable view of the mail delivery service.

Many agencies, including the IRS, are viewed favorably by majorities in both parties 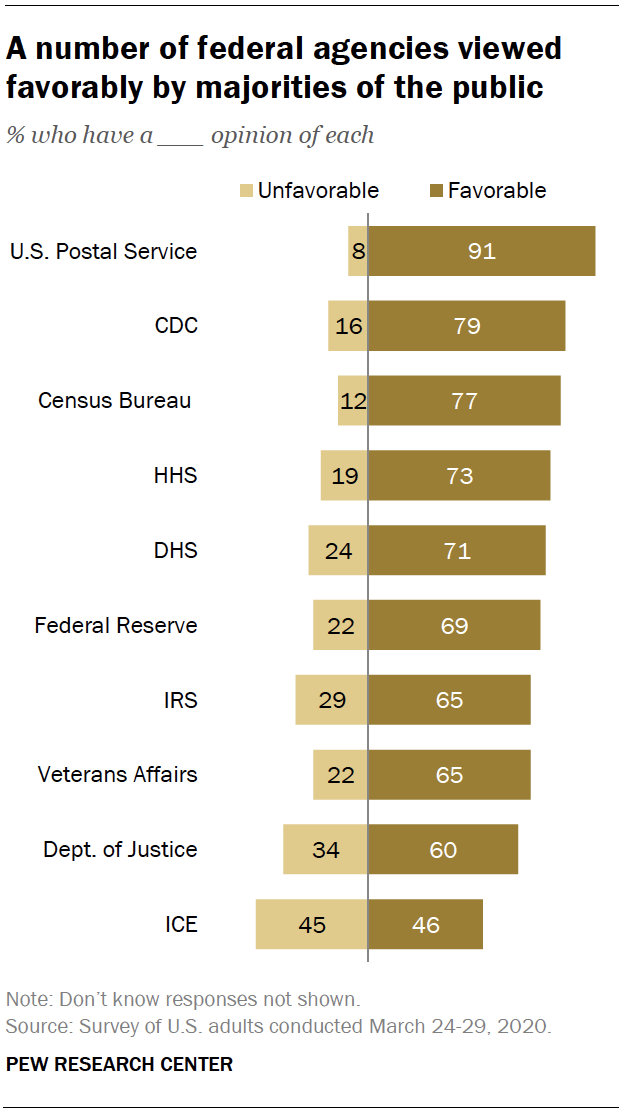 Of the 10 agencies included in the survey, nine are viewed more favorably than unfavorably by the public. ICE is the only agency for which about equal shares express an unfavorable (45%) as favorable (46%) view.

Among the agencies viewed in positive light, the majorities viewing each favorably range from 91% for the Postal Service to 60% for the Justice Department.

About two-thirds view Veterans Affairs and the IRS favorably (both 65%). Slightly more hold favorable views of the Federal Reserve (69%) and the Department of Homeland Security (71%). 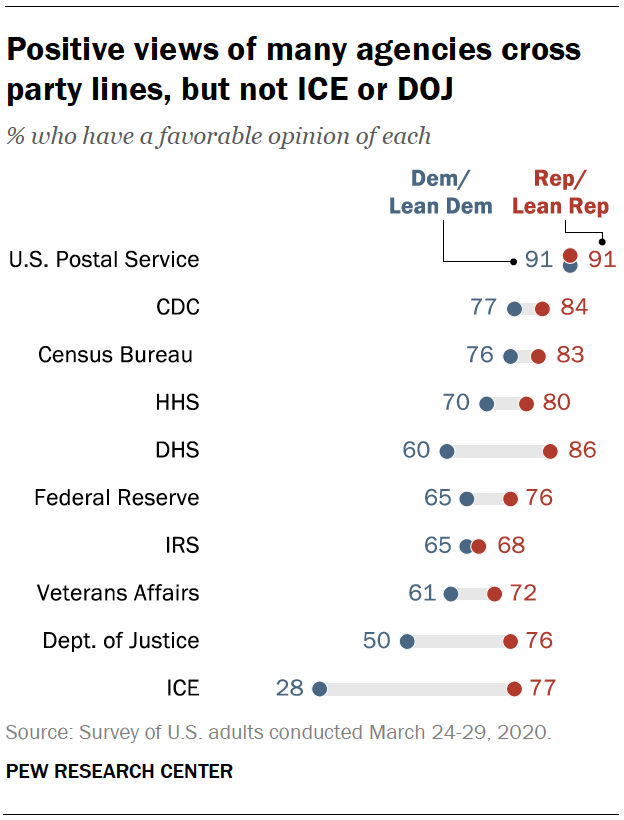 For many federal agencies, there are only modest differences in ratings between Republicans and Democrats.

For instance, large majorities of Republicans and Democrats have favorable views of the Postal Service, Census Bureau, CDC and HHS.

A broader majority of Republicans (86%) than of Democrats (60%) view the Department of Homeland Security favorably. The partisan gap is similar in views of the DOJ.

The widest partisan divide in the survey by far is in assessments of ICE: Republicans and Republican leaners are 49 points more likely than Democrats and Democratic leaners to hold a favorable view of the agency (77% vs. 28%). 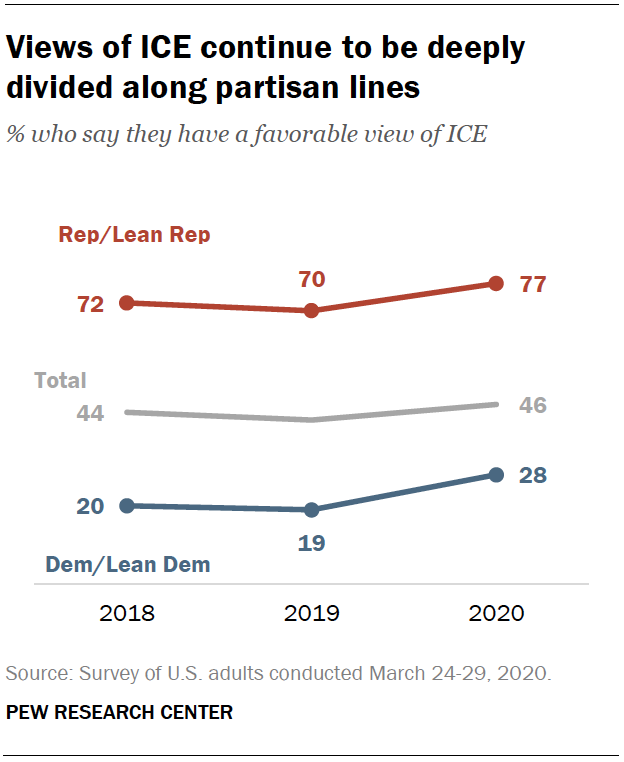 The share of Republicans with a favorable view of ICE has increased 7 points since September 2019.

Among Democrats, ratings of ICE remain overwhelmingly negative (64% view the agency unfavorably), though the share with a favorable view has increased since last fall (up 9 points).

The overall gap in ratings of ICE between Republicans and Democrats remains about the same as it has been over the last few years.

As the Census Bureau launches its decennial census, majorities of both Republicans and Democrats hold positive views of the agency. 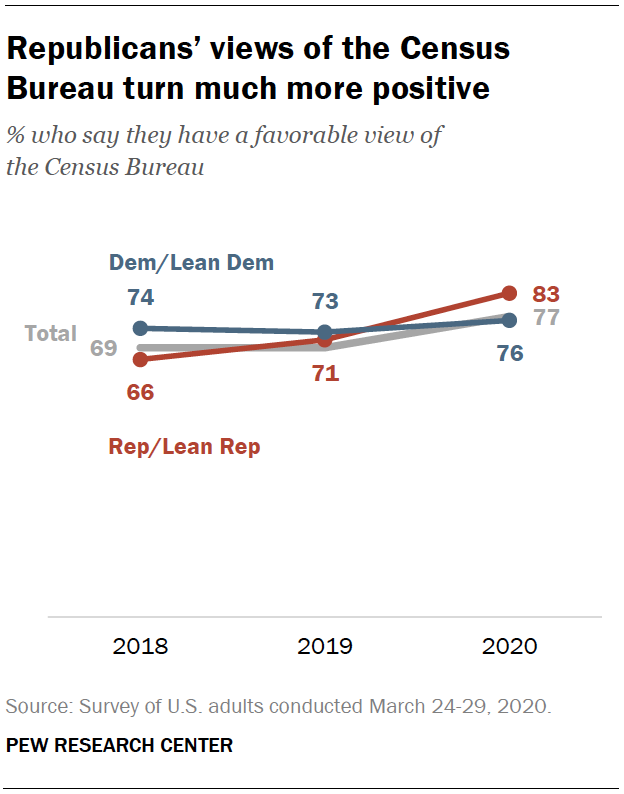 Among Democrats, views of the Census Bureau have remained relatively stable. About three-quarters of Democrats (76%) say they hold favorable views of the agency today; views were similar in 2019 and 2018.